Flowing for 1,300 miles through exotic Myanmar, the Irrawaddy River has become one of the most popular river cruise destinations in Asia, with new cruise lines and vessels proliferating along the country’s longest waterway. An Irrawaddy river cruise typically runs between Yangon (Rangoon) or Bagan and Mandalay, with unforgettable views of pagodas, Buddhist temples, villages, mountains, jungles, gorges, and rice paddies. With so many places to see like that, in this article, we list the top 10 best Irrawaddy attractions and the best thing to do there. Keep scrolling down to check it!

Stay in the heart of Myanmar (Burma), Mandalay is Burma’s second-largest city and served as the country’s last royal capital. Not just an important administration, Mandalay is also one of the best Irrawaddy attractions.
Still the spiritual center of Burma’s Buddhist culture, this is home to thousands of Buddhist monks, an array of colorful pagodas and monasteries, and more than 2,500 Buddha images, many carved from alabaster. Cruises often embark or disembark in Mandalay, offering extra time for sightseeing there.
Expect to be mesmerized by the exquisite architecture as you stroll through Shwenandaw Monastery, Kuthodaw Pagoda and the complex architecture of Mandalay Hill. Then we are sure that you never want to miss a chance to witness one of the most sacred Buddha images in Mahamuni Pagoda. About 50-minute drive from the city center is U Bein Bridge. At a length of 1.2 km, it is considered the longest teak wooden bridge in the world and also one of the best places to watch the sunset in Myanmar. 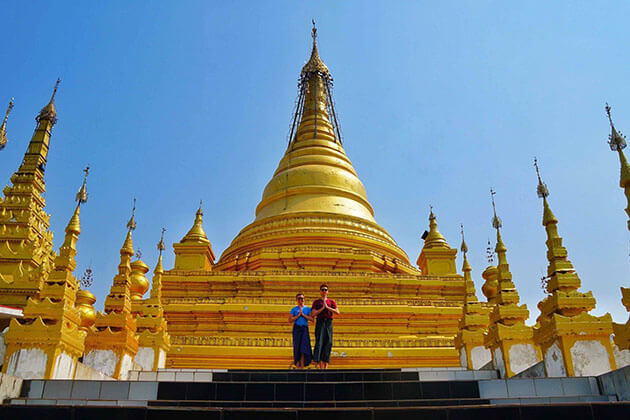 A stop at Sagaing from Irrawaddy cruise gives you a chance to hike up to the top of the 240m hills and marvel at the panoramic view of Sagaing with countless pagodas and great Irrawaddy River. Buddhist pagodas and monasteries are unignorable sites in Sagaing. There are many pagodas on the top of the hill, among them, U Min Thonze and Soon U Ponya Shin Pagoda are the two most popular ones.
Besides, Kaunghmudaw Pagoda is also one of the must-see pagodas when you visit Sagaing. This special and impressive pagoda was built in Sri Lanka style with the shape of an egg, which people might call onion and golden stupa. The third place to visit in Sagaing is the Inwa Bridge. You can spend tie to wander through the bridge and enjoy the romantic beauty of the Irrawaddy River and its dolphins, as well as feeling the cool wind and seeing the blue of the sky is also a great way to discover Sagaing. 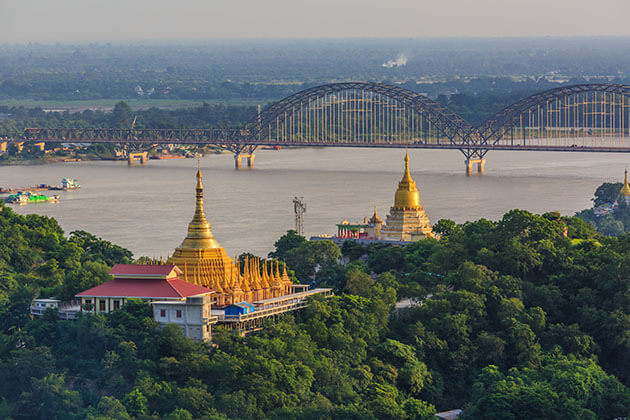 When you get off Mingun from the cruise, you will arrive at Mingun Pahtodawgyi, the colossal unfinished temple that has been damaged by earthquakes. From the top of the Pagoda offers a breathtaking view to the scene of Mingun and Irrawaddy River.
About a 5-minute walk from Mingun Pahtodawgyi is Hsinbyume Temple, a wonderful construction built by King Bagyidaw to show his love for the wife who unfortunately lost her life when giving childbirth. Before returning to your board, don’t forget to check out Mingun Bell – the world’s second-largest ringing bell. 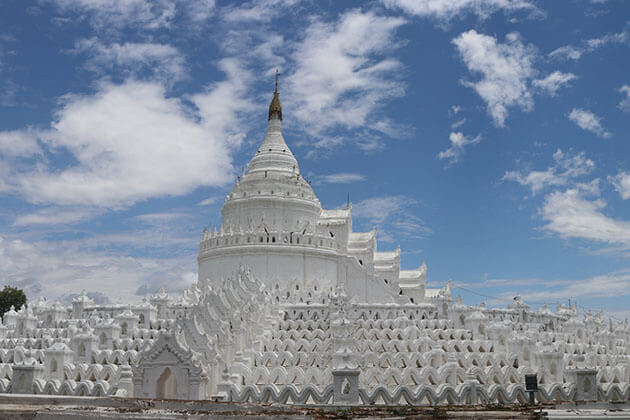 No Irrawaddy cruise is completed without visit Bagan – one of the greatest archaeological sites on earth which was recognized as the second UNESCO Heritage Site in Myanmar. With a repertoire of the massive Buddhist temples, built by King of Pagan Dynasties over many centuries, Bagan is undoubtedly the best attraction for the Myanmar Irrawaddy river cruise.
Nowadays, with over 3000 temples still remaining, Bagan unleashes fair chances for you to freely explore the art and architecture. You can choose from a wide range of moving ways such as walking, cycling, buses, tuk-tuk or on a hot air balloon to discover the marvelous sites.
Toward the southeast of Bagan lies Mount Popa – an extinct volcano which is together with a sacred Buddhist monastery situated dramatically on the top, which will give you a chance to learn about the natural spirits of Myanmar. 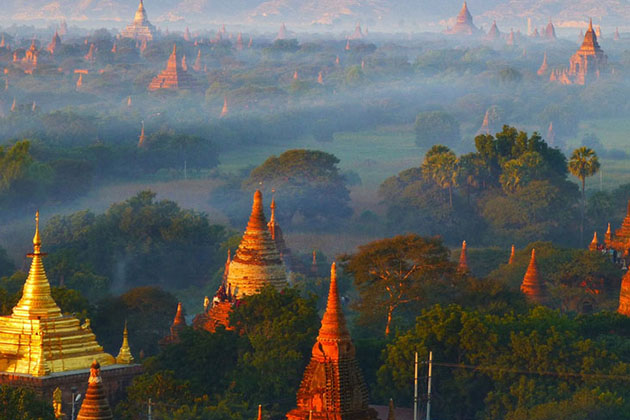 Being the former capital of Myanmar, Yangon is one of the most attractive attractions for the Irrawaddy river cruise to admire one of the greatest Buddhist pagodas in the world – the elegant Shwedagon pagoda. Made from 16 tons of pure gold with over 5000 diamonds and rubies studded on top, the mystical beauty of Shwedagon is visible from almost every corner of the city.
Together with the magnificent pagodas, the breathtaking scenery of the city is also a highlight which will truly fascinate your senses. Widely known as the “Garden of the East”, you can expect to be overwhelmed by the landscape of local green lakes, shady parks, and verdant tropical trees. Want a bit of excitement? Soak into the hustle and bustle markets in Yangon. They are the paradise that almost makes you swoon! Bogyoke Aung San Market, Theingyi Zay, China Town, Anawrahta Road are all great places and worth exploring. 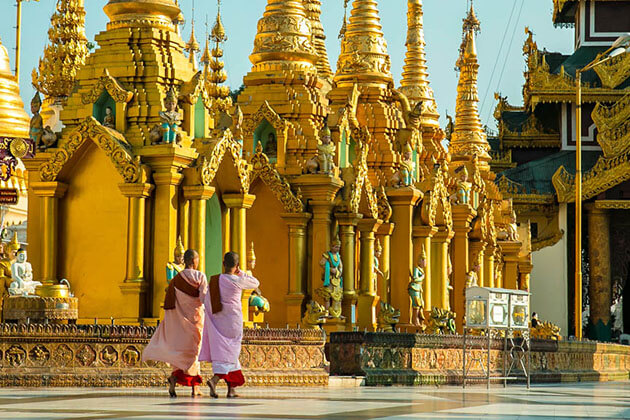 Located 25 kilometers north of Bagan, Pakokku is a quiet and traditional country town on the banks of the Irrawaddy. Once was the bustling trading town of Burma which is best known for tobacco trading, visiting Pakokku from the Irrawaddy cruise will give you a chance to witness the local market where you can see an array of tobacco in the market area. If you take a cruise at the end of May or the beginning of June, you will have a chance to attend the delightful Thiho Shin Pagoda Festival. 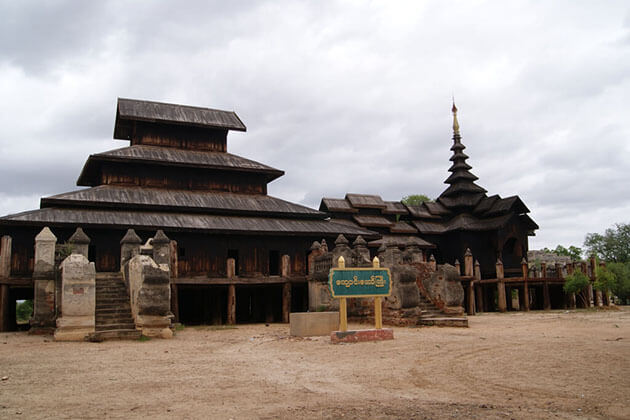 One of the must-see Irrawaddy attractions on the route between Bagan and Mandalay, Yandabo is a small charming village that is not just being a famous historical site where the Yandabo Treaty was signed to end the first Anglo-Burmese war, but also well-known for pottery making tradition.
Step into the village, you will see many women making the pot together. Visit a local family, you will have a chance to get the first-hand experience looking at the entire process of making a pot guided by the local artisan. This trip will even more meaningful as you can try your hand on making a pot on your own to fulfill your experience. 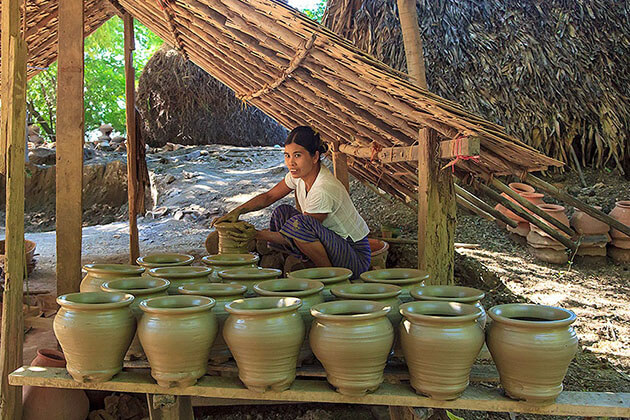 Lies on the banks of the Irrawaddy in Kachin State, the peaceful town of Bhamo is a perfect stop for Irrawaddy river cruises. Passengers will have a chance to indulge in the stunning view of natural scenery as well as discover interesting Buddhist temples. Theindawgyi and Shwe Kyinna Pagoda are the two most famous pagodas in Bhamo that tourists often visited most in the town.
Besides, the bamboo bridge is also a highlight for tourists to immerse themselves in the extremely peaceful aura in the village. After a long day of cruising and sightseeing, we recommend you to enjoy the gorgeous sunset at Bhamo port. Sit back, enjoy the view and let all your stress release into the air. 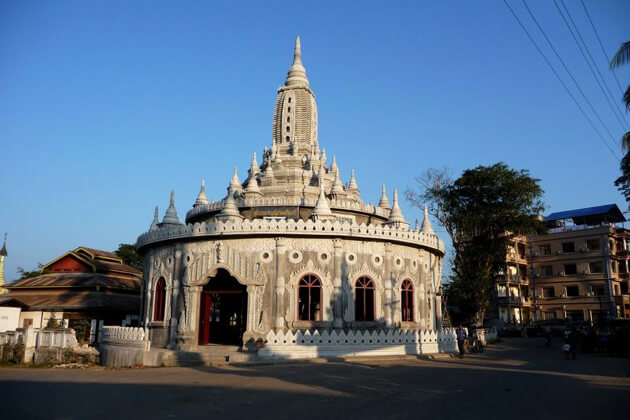