Unlike other countries in Southeast Asia where the people rarely wear traditional clothes every day, Myanmar traditional dress is surprisingly present in every corner of the street. The dress of Burmese people remains a strong connection with the country’s culture which is not replaced by western clothing. In this article, let find out details about the national costume of Myanmar to fulfill your understanding of the country.

Myanmar traditional clothes are considered to be date back to the 18th century when they were designed intricately and worn by those who held positions of power in the Konbaung court.
The traditional outfit of women was floral head ornaments, decorated blouses, felt footwear, and a htamein. Men worn turban, hnyat-phanat slippers, a silk jacket embroidered with fur, and a cotton shirt. Later, it was changed slightly at the end of the British era in the country. 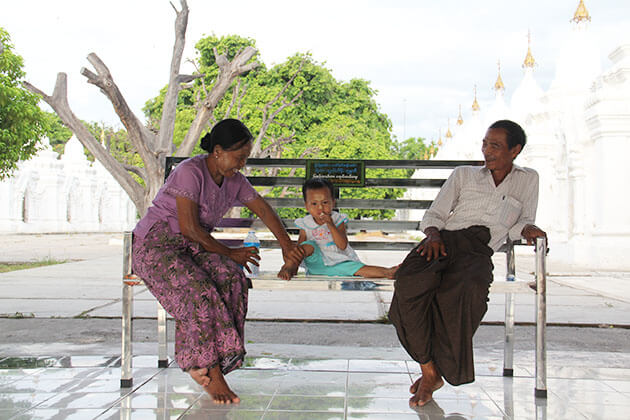 Traditional Dress of Myanmar for Male

Longyi is the main part of Myanmar’s traditional dress for men, which combine well with a shirt or jacket called Taipon. Myanmar longyi is relatively flexible in sizes and shapes to match the different shapes of the man’s body. It is a sheet of cloth which is about 2 meters long, 80 centimeters wide which is functional, comfortable, and breathable when Myanmar gets to be unbearably hot. Normally, longyi is sewed into a cylindrical shape, which is worn around from the men’s waist to their feet.
Longyi is designed without pockets so it is quite hard to carry cash, mobile phone or other personal items. An interesting point of Longyi for men in Myanmar is that it is trapless and quite loose. As a result, they have to adjust the skirt and wrap it back tight even in the middle of the street. 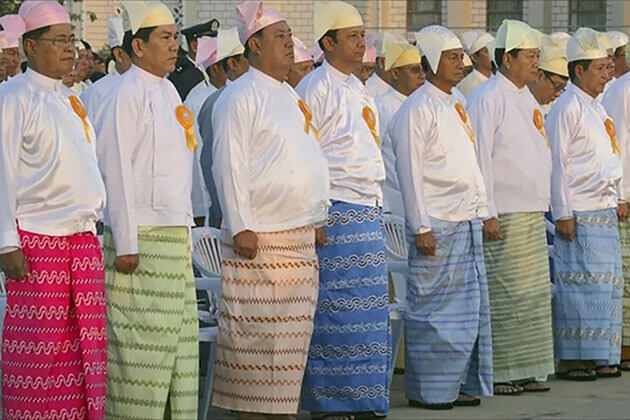 Traditional Dress of Myanmar for Female

Thummy is the traditional dress of Myanmar for Burmese women. It is also wrapped around the body like men but much tighter at their waist. Like Thailand and Laos, Thummy is quite similar. Burmese women do not wear the turban-like men.
Traditionally, Burmese women wear a traditional outfit including Thummy with a jacket. Nowadays, you can see they also mix Thummy with other items of clothing, from T-shirts, shirts, jackets, to vests for more convenience. 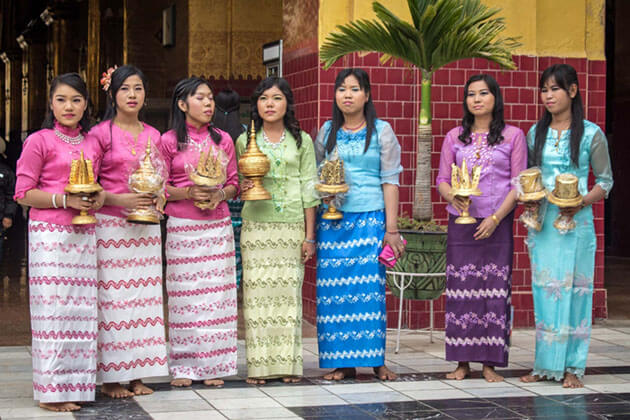 Unlike other countries in whose traditional costumes such as Ao Dai, Kimono or Hanbok in which the dress is considered the symbol of culture and worn on special occasions and national festivals. Myanmar’s traditional dress is worn by Burmese people every day while going to work, riding a motorbike and attending sport competitions for the following reasons:
First, the weather in Myanmar is hot and it can reach over 40 degrees, the costumes’ material is suitable to make people feel comfortable.
Secondly, these traditional clothes are very easy to mix with other items.
Next, the structure and style of Burmese traditional dress are very simple so it is easy to put on and take off when needed in daily life.
Even more, the Myanmar dress also becomes a multifunctional item in many cases. For instance, hey can be pulled up to be used as the “raincoat”, “the UV sun shirt”. Burmese women can also enroll it to make a stable substrate to carry commodities (fruits, rice bags, foods) without holding hands.

The Development of Myanmar National Costumes

Along with the development of society, Myanmar witnessed a rapid change in the country so it can’t be denied that modern fashion from western countries has created a significant change in the lives of Burmese people. There various designs for Burmese longyi which help them more comfortable and easier to wear the traditional dress every day. 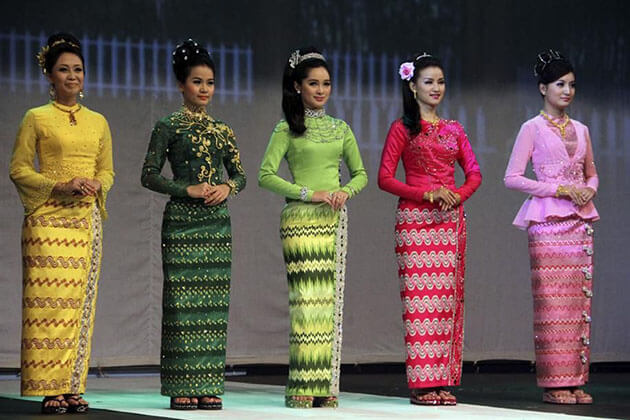 Where to Buy Myanmar Dress When Traveling to Myanmar

Hopping on the Myanmar river cruise, wearing the traditional costumes of the country is a great experience that you should never miss on your trip. Base on the design and quality that you can get the longyi at different prices. Kyal Sin Longyi Shop at I-20, Ground Floor, Yuzana Plaza, Yangon is a good place in Yangon to purchase the dress at high quality. Additionally, Boygyoke Aungsan Market is also one of the most popular places in Myanmar to purchase Myanmar dress.