Taking place in April annually, Myanmar water festival, traditionally known as the Thingyan water festival, is the most important traditional festival of the Burmese to celebrate the New Year in Myanmar. It is a highlight of Myanmar that you should never miss when traveling to Myanmar. Once indulge in the delightful moment of the festival, you will never forget the bright smiles, exciting activities and scrumptious food. Let explore this interesting traditional festival before joining it from your Myanmar cruise trip.

The history of the Myanmar Thingyan water festival dating back to a very long time ago. Originated from the Buddhist from the Buddhist version of a Hindu myth, Thingyan, in the Sanskrit language (Indian ancient language), meaning “transit of the Sun from Pisces to Aries”.
According to legend, the Thingyan festival is an event to henceforth to signify the changing hands of the Brahma’s head – a powerful god who lost his head in a gamble with Devas. However, it was hard to deal with the head of Brahma as it would vaporize all of the water if being thrown to the ocean and explore the earth if being put in the ground. Likewise, Indra entrusted it to Nats who are the guardians of Myanmar people to supervise alternatively year by year. New Year’s time in Myanmar is the time when the head of Brahma was transferred among the Nats.

Every year, from April 13th to 16th in the Western calendar, Myanmar water festival is celebrated to wash away the sin and purify the soul to welcome a New Year and to wish each other good luck. There are varied activities to do at the water festival in Myanmar.
The first day of the Thingyan Festival is called Thingyan Eve, also called a-kyo nei in Burmese. There are so many interesting activities to do during the day time such as almsgiving and offerings, washing figures of Buddha and cleaning the pagodas. Traditionally, each family puts myrtle branches on their front door to ward off disaster and bad luck. 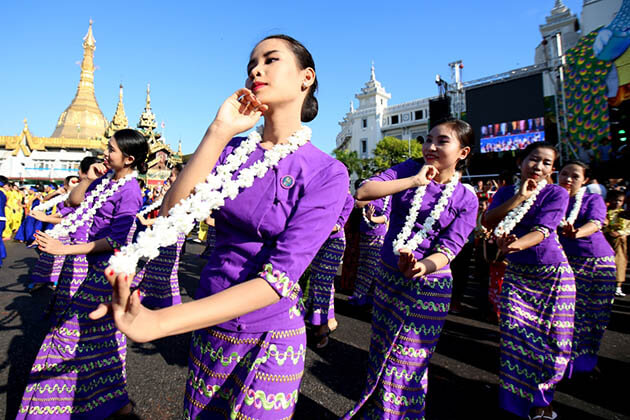 At night, people celebrate the merrymaking with song and dance. This time, many pavilions and stages with well-decorated bamboo and wood appear. Showgirls dress in colorful attires form a beautiful backcloth for the nighttime fun.
From the second to the fourth day is the time when the water festival in Myanmar takes place. During these days, people pour out the street to attend the water fighting festival. People collect water with pots, buckets, and guns.

Yangon, Nay Pyi Taw, and Mandalay are three cities where tourists can witness the biggest celebration of the traditional water festival. On these days, there will be many trucks running around the street to pick up people. Tourists can also join the drive to enjoy the Thingyan festival with the locals.
Together with splashing water during the festival, local performances by puppeteers, orchestras, dance troupes, comedians, and many more are performed to bring joy to the people during the festival time. 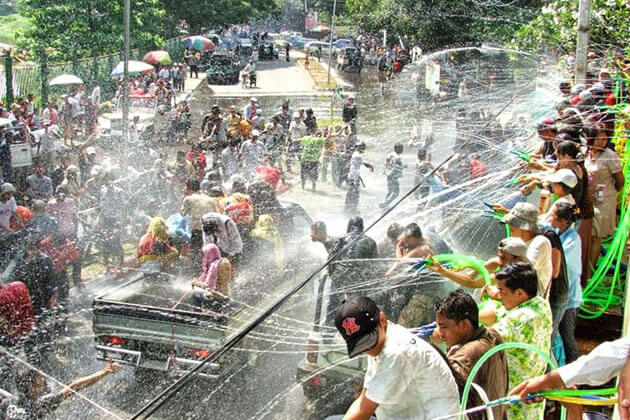 On the fourth day which is also the last day of the Thingyan festival, it is considered when Thagyamin goes back to heaven. It is called by the locals as a-tei nei. During the day, people often eat mont lone yei baw (glutinous rice balls with palm sugar).

Together with interesting activities, Thingyan food is also one of the most expected things in the Myanmar water festival. Let have a look at the best food to eat during the Burmese water festival:

Mont-lone-yay-paw is the sticky rice balls with jaggery filled center and topped with fresh coconut. This is one of, if not the most popular and iconic foods that represent the traditional Thingyan water festival in Myanmar. The food is considered Thingyan food because of the way it is made. As the cooking process is quite tedious, a lot of people come together to prepare mont-lone-yay-paw making it a perfect family food. 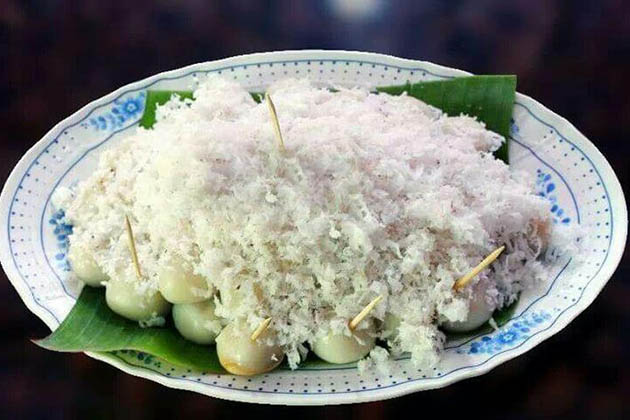 Shwe-yin-aye & Mont-lat-saung are favorite desserts of the Burmese people to eat at the Thingyan festival. Mont-lat-saung is made from coconut milk mixed with small lumps of rice jelly. Depending on the area, you will have Mont-lat-saung with different colors of jelly. Shwe-yin-aye, on the other hand, is made with an old drink prepared from sago, gelatin, sugar and coconut milk.

Thingyan Hta-min is a special dish of the Burmese to eat widely all over the country. It is cooked rice in scented water eaten with a variety of side dishes such as dried fish, fried chilies, assorted pickled salads, and other savory dishes. 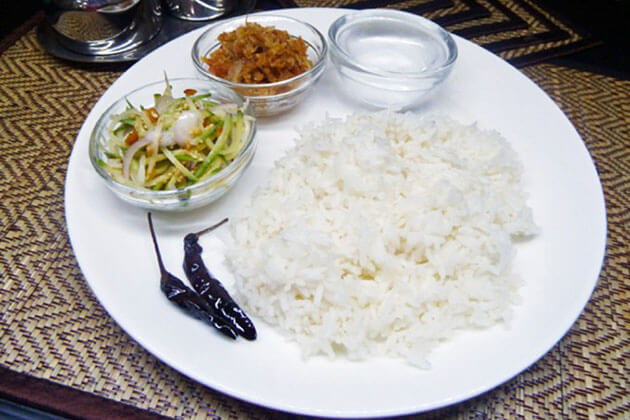 Tips for Traveling to Myanmar in Water Festival Time

Because there will be a lot of visitors attending the festival, therefore, you should book air tickets and hotels well in advance.
When visiting the country as well as taking part in the festival, respect the local culture and customs.
You will expect to get wet at the festival and get lost in the crowd, so do not bring valuables, especially electronic products otherwise, they will be soaked into the water. If you need to bring your phone and camera, keep it in a waterproof bag.
Slips and sandals are highly recommend to wear during the festival
You can splash all people in the water fighting festival in Myanmar, but remember that don’t splash old people, monks, pregnant women or drivers.
April falls in the hot season, so remember to use sun cream to protect your skin in the heat.
Myanmar people respect the head and face, therefore, do not throw water straight at someone’s head or face.
During the four days of the festival, almost banks, restaurants and stores will be closed. Therefore, you should have a plan to buy food and exchange cash in advance.